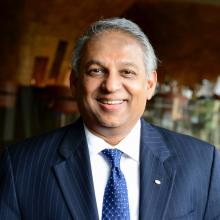 His Excellency, Mr. Buddhi K. Athauda, serves as Ambassador Extraordinary and Plenipotentiary of the Democratic Socialist Republic of Sri Lanka for France, Spain, Portugal, Monaco, Andorra, Permanent Delegate to UNESCO and UNWTO. During his long and eminent diplomatic career, he has served both multilaterally and bilaterally in diplomatic missions for the past decade as the Sri Lankan Ambassador to the Kingdom of the Netherlands and as Consul General of the Democratic Socialist Republic of Sri Lanka in Frankfurt, Germany with the jurisdiction of the States of Baden–Württemberg, Hesse, Rhineland Palatinate, North Rhine Westphalia, Saarland and Bavaria.

Born in Sri Lanka in 1961, he completed his University education in the USA and earned his MBA in Finance and International Business.  Ambassador Athauda commenced his professional career in satellite mobile communication industry by joining IRIDIUM LLC, a high-tech startup in Washington D.C. USA, with the idea of developing a satellite mobile phone that would provide voice and data signal coverage for the entire plant Earth, supported by 66 satellites in the Low-Earth-Orbit.  During his tenure at Iridium LLC,  he contributed to the development of business plans for fund-raising,  global brand launch, global product launch, establishment of the global call-center in India. He also contributed to the listing of the company in the New York stock exchange.

Prior to assuming his current position in France, Ambassador Buddhi K. Athauda served at the Board of Investments of Sri Lanka (BOI) and many private corporations including energy, luxury real-estate, investment banking and high tech industry sectors.

Ambassador Buddhi K. Athauda is the co-founder of the Diplomatic Council, a United Nations (UN) accredited, global Think Tank.  Diplomatic Council believes in flourishing economy that brings prosperity to mankind is one of the best guarantors of peace, Diplomatic Council serves as a bridge between diplomacy and economy in the civil society.

During his Ambassador post the Netherlands, he was elected to many leadership positions in many Multilateral organizations, including Chairman for the Common Fund for Commodities (CFC), Permanent Court of Arbitration (PCA) and Vice Chair of Organization for the Prohibition of Chemical Weapon (OPCW).

Mr. Buddhi K.  Athauda is married.  He has three children.